Presence: the prerequisite for leadership!

Many books have been written on leadership and you can find about anything you are looking for that explains what makes leaders be leaders.
For those who do not wish to spend time reading, a very simple quality can make a very strong impact on your group. It does not matter if this group is your employees, your family or any social group to which you belong. That quality is presence.

By being present, you send a very clear message: you are involved, you are part of your team, and you are ready to take action and responsibility. This gives a tremendous feeling of security to the members of the team who depend on you. They know that they are not left alone to deal with problems, while the “boss” stays out of the hot spot. This is quite important if you want your instructions to be followed. Rarely seeing the leader, or receiving instructions by emails or from a distance is not motivating, and makes many team members wonder what the respective roles actually are, all the more so when their level of reward is quite different from the leader’s. Such poor leadership very often goes together with a lack of positive feedback (usually such leaders are not shy on negative feedback, though), which is also perceived very poorly. 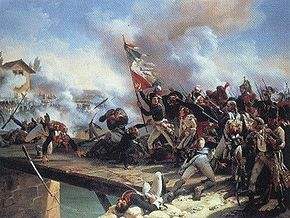 A famous example of presence for a leader is the battle of the bridge of Arcola. Napoleon was still a young general and the battle against the Austrians was not going too well. The story is that Napoleon took the flag and led his troops marching on the bridge, dodging bullets. This reportedly boosted his army’s spirits; they followed him on the bridge for the direct confrontation with the enemy. The result was a strategic victory. Even though this story seems to have been embellished, as Napoleon might not have acted as heroically as the story states, it certainly has established his leadership position and it created a strong mystique about his persona.
Presence, and courage, made him bigger than life!

This entry was posted on Friday, June 19th, 2009 at 10:08 pm and is filed under Business Management, Leadership, Team and Performance. You can follow any responses to this entry through the RSS 2.0 feed. Both comments and pings are currently closed.